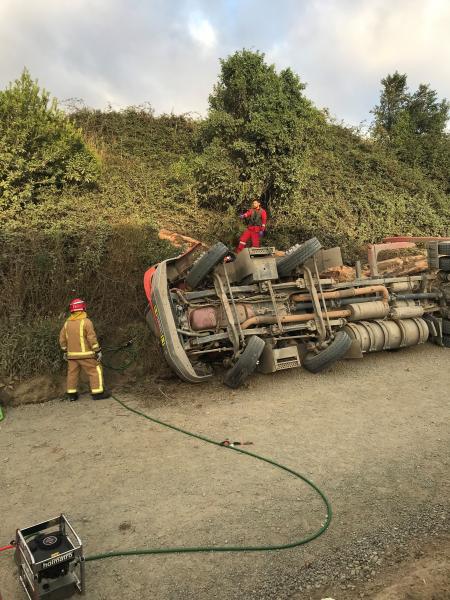 It was 6am. I had just picked up the logs from a crew in Raupaunga as I did many times a week. As I headed back to Napier, the brakes on my truck suddenly stopped working. No matter how hard I pushed, I couldn’t get them to work.

By this point I’ve lost control of the logging truck and there is no room to run the truck into the bank to stop it. I take the corner and brace before the truck rolls over and slides across the gravel.

Suddenly, CRUNCH, the cab has compacted in the force and I am up against the bank upside down.

This is where I stay for the next 40 minutes until someone finally found me. Another logging truck driver sees my crash, runs to the wreckage and calls out my name. I could hear the relief in his voice when I shouted out and he knew that I was still alive. He called back to the loader driver from where I had just been to come down to help. They quickly realised there was nothing they could do without professional help so he called 111 and I heard him say, don’t worry the rescue helicopter is coming. It felt like only seconds later and I could hear the helicopter coming in to land. The relief was instant. Finally, someone was there to help me.

I had no idea how damaged the truck was and just how stuck I was. In reality, the helicopter and the St John ambulance had turned up at the same time, so I suddenly had two incredibly well-trained Intensive Care Paramedics running to my aid. Between them and the helicopter crew, everyone tried to pull me out of the truck. Unfortunately, I was so stuck that without the help of the fire service, there was no way of getting me out safely. I didn’t know, but at this point, I started to go really downhill. The paramedics were saying that if they didn’t get me out soon, I wasn’t going to survive.

Thankfully, the fire service turned up with the jaws of life to remove me from the crushed cab. It was a roaring sound as they finally got me free and pulled me out. From there the shock started to set in. The paramedics took over and worked on diagnosing the injuries I had sustained. There was severe damage to my right leg including large lacerations and I had broken bones. They also discovered that I had broken my arm and my back. I had bumps and bruises all over me and they were seriously worried about internal bleeding.

The next thing I remember is being loaded into the helicopter and hearing the engines start up before we flew off to Hawke’s Bay Hospital. I could see out of the back windows and I saw the coast line of Napier and heard my phone ringing in my pocket. I was in no state to answer it but I knew it would be my wife, worried about me after hearing I had been in an accident. We then landed at the hospital, where my wife was waiting. I felt immense relief when I finally saw her face. The paramedic, Carlton, took me into the Emergency Department where the doctors and nurses took over. It’s been a really long recovery. I am still unable to walk or sit for long periods of time. I can only just drive again but the idea of going back to work is still a long way off.

The pain, multiple operations and emotional rollercoaster I have been through have been incredibly hard but you know what? I’m here! The rescue helicopter and other emergency services were there for me on the day and between them and the hospital, I am on track to make a full recovery. When you see the picture of my truck overturned, you wouldn’t think someone would survive that, let alone get back to normal. It’s been a long road but I am so grateful to the Lowe Corporation Rescue Helicopter Service for being there for me when I needed it. I wouldn’t be here today without them.