On 16 January at 10:00am, the Hawke’s Bay Rescue Helicopter was called to a rural address in Tutira, where Michael Thomas, 49, had seriously injured himself with a knife.

“We had been hunting the night before,” said Michael, “and I was cutting up a deer in our shed, when the carcass started to slip on the hook. Instinctively, I reached out to catch it before it fell, while still holding the knife in my hand which connected with my left wrist”

Luckily, Michael’s daughters were with him, who were all first aid trained, and who managed to apply a tourniquet and call 111. As the farm was an hour and a half by road to the nearest hospital, the Rescue Helicopter was dispatched to the scene.

“I knew it was a bad cut” Michael said, “but I didn’t think it was bad enough for the Rescue Helicopter to be called out. I suppose I was concerned that the service was being taken away from other people in need”

However, Chief Pilot, Charlie Beetham, who attended the scene said, “Michael was certainly in need! It was clear on arrival that he had severed the main artery in his arm and needed urgent critical care”

Michael was transported to the Hawke’s Bay Fallen Soldiers’ Memorial Hospital, where damage to his artery and tendons was repaired. He is now facing around 6 week’s rehabilitation and recovery, but knows that without the quick thinking of his daughters, and the quick response of the Rescue Helicopter, things could have been so much worse.

“It was a simple accident that could have happened to anyone. At the time I didn’t realise the gravity of the situation, but now I understand that without quick treatment, the outcome of that morning could have been very different” Michael added, “I urge everyone living in a Rural location to not only support the Rescue Helicopter, but to ensure that their farm details are up to date with the Rescue Helicopter team” 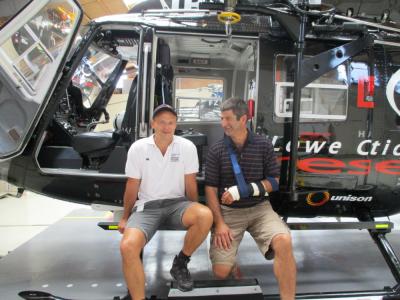