Many remote rescues over the years would have been slow and painful if not for the availability of the Hawke’s Bay Rescue Helicopter Service, but in Legeon Thompson’s case it was clear cut – he would have died and left behind his partner and four children.

The 36-year-old Hastings forestry worker recalls getting serious chest pains while thinning pine trees in the Mohaka Forest in September. While lying on the ground trying to shake out pain which he thought must be cramp, his manager and brother-in-law began to realise the symptoms of a heart attack. Following protocol, a call was made on the emergency two way radio, and assisted by a second brother-in-law, Legeon was driven to a clear site to await rescue.

The helicopter response was rapid, but before reaching Hawke’s Bay Regional Hospital, Legeon suffered cardiac arrest, meaning the helicopter had to make an emergency landing while paramedics shocked him back to life, and delivered life-saving, clot busting drugs. Legeon reached the hospital under active CPR from the paramedics. Soon after being wheeled into the emergency department, partner Jessica was considering news that there was a very real chance he wouldn’t survive. “We were distraught”, she says, “we thought we were losing him”.

A decision was quickly made to make a second flight in the Rescue Helicopter, to take Legeon to the cardiac unit at Wellington Hospital, where treatment included putting a stent in one of his arteries. To the relief of his whanau, he was able to make a gradual recovery, but is going through an enforced lifestyle change where any physical work has been ruled out for the immediate future.

With a young family, the situation has created some financial strain, but Legeon says he’s keen to show appreciation to the helicopter crew, who managed to help put him at ease with the way they handled an otherwise awful event.

Jessica says the experience was a terrifying and difficult time for her and the children, but has been amazed at the level of care and attention from everyone involved in Legeon’s rescue and recovery. She says considering how close he came to dying during the flight and in hospital, there is no doubt he wouldn’t have survived with the vital rescue service.  “I’ve always thought they are awesome and I want to say thank you for saving his life.” 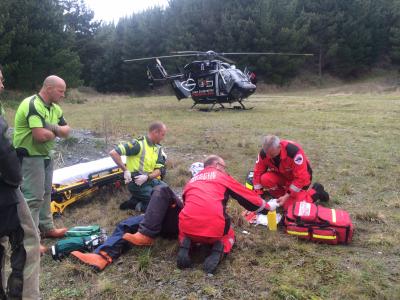 Top: Legeon being treated by paramedics at the forestry site.

Bottom: Legeon meets the crewman who saved his life