Ashurst hunter, Timothy Edge, who spent more than two hours walking out of the bush in the Pohangina Valley on a broken foot, is warning others to not follow in his footsteps.

Tim had been walking back to camp with a full pack of venison, when he slipped on loose ground and fell down a bank, breaking his foot. Instead of calling the emergency services, Tim called his dad to let him know he’d been injured, and told him that he was going to try and make it out himself.

"I left the safety of my campsite, which was in a clearing, and went back into the bush to get myself out," Tim said "In hindsight I did the wrong thing."

Luckily for Tim, his dad did call the emergency services, and the Hawke’s Bay Rescue Helicopter was despatched to the scene.

"I was embarrassed to call for help as I thought it might have been a sprain and I didn’t want to call the Rescue Helicopter away from something more important” said Tim, ”Even though I’m not the most experienced hunter, I felt I knew the area well enough that I could get out on my own – which wasn’t the case”

The Rescue Helicopter Crew eventually found Tim on a farm, bordering the bush, and airlifted him to Palmerston North Hospital for treatment.

Chief Pilot, Charlie Beetham said, “luckily we were able to find Tim, but had anything happened while he was making his way out of the dense bush, it would have been a lot harder to locate him and winch him to safety, especially as he had not activated his Personal Locator Beacon”

In an emergency situation where time is critical, Personal Locator Beacons can save lives, as they allow rescue services to accurately pinpoint your exact location, even in rural or remote areas, or under cover of darkness.

Tim had taken extra food and water, a tent, a GPS he regularly logged his location with, along with a personal locator beacon, but he never activated the beacon.

Tim’s advice to others; “Don’t put your pride ahead of your life. I was lucky, but I am well aware that because of the decisions I made on the day, the outcome could have been a lot worse”

“Having all the right gear is one thing” Tim added, “but that really doesn’t matter if, in an emergency, you don’t use it” 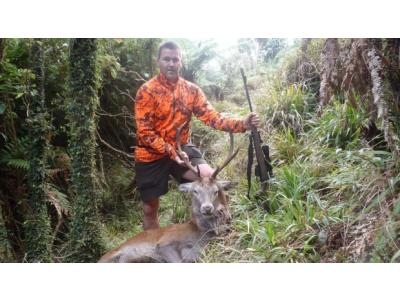