When local business Advanced Plumbing started sponsoring the Hawke’s Bay Rescue Helicopter Trust, owner Mark Watkins never thought it was a service he may one day need himself. But six years later, while on a hunting trip, Mark suffered a life changing accident hours from the closest hospital.

While retrieving a deer from the bottom of a slip in the remote Tarawera district, Mark found himself toppling forward, somersaulting several metres onto sharp rocks below. Mark had suffered severe trauma to nerves and muscle near his spine during the fall, and while his mate managed to haul him up to a track where their truck was parked, the shock, pain and partial paralysis meant that a helicopter rescue was Mark’s only option.

The Hawkes Bay Rescue Helicopter tracked them to their GPS location, and Mark’s long recovery began from the minute the paramedic greeted him. Mark says “the sounds of the rescue helicopter approaching was unforgettable and I felt such a relief knowing I was going to be ok”.

“Having experienced first-hand the skill and professionalism of the Rescue Helicopter, it has strengthened our commitment to the Trust. I would encourage other local businesses to support the vital work of this important organisation” 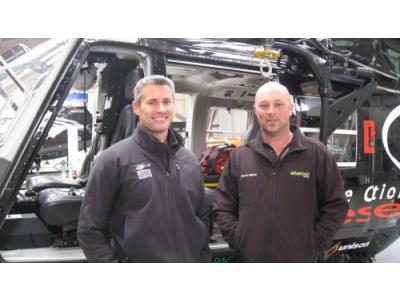