Thursday the 14th of June began like any other day for our Rescue Helicopter Crew.

Little did they know that by the end of the day they would have been pivotal in the rescue of critically injured patients from one of the worst aviation accidents that Hawke's Bay has seen for a number of years.

At 9am - a regular crop surveying helicopter flight over Ngamatea Station crashed with five people on board. Two occupants were seriously injured, and one was critical. The crash automatically activated the locator beacon on board and a signal was sent to the Rescue Coordination Centre. They immediately dispatched the Taupo Rescue Helicopter (the closest Rescue Helicopter to the accident) to provide initial medical relief and a scene assessment. Due to the serious nature of the incident both the Lowe Corporation Rescue Helicopter and the Palmerston North Rescue Helicopter were also dispatched to the scene.

Our Pilot Hamish and Chief Crewman Geoff landed with a St John Intensive Care Paramedic on board. Our priority was the critical patient, Renata Apatu (the co-owner of Ngamatea Station), who had suffered the worst injuries in the accident.

Ren was quickly stabilised and urgently flown back to Hawkes Bay Hospital within 15 minutes. Shortly after landing and transferring Ren to the care of the Hospital’s Emergency Department, both Palmerston North and Taupo Rescue Helicopters also landed in Hastings with their seriously injured patients onboard. Despite our best efforts, and those of the Doctors involved that day, sadly Ren’s injuries were extremely serious and proved to be fatal.

We can’t always save every patient we rescue, but we know that our service allows us to deliver the best medical care within a crucial space of time, giving critically injured patients the very best chance of survival.

For the crew of the three Rescue Helicopters involved – their professional and swift response to the accident is what they
do on a regular basis. The Aviation Industry is very close knit, and attending an accident where other helicopter personnel are involved is understandably difficult for everyone. We would like to acknowledge the Pilots and Crews involved on that day for a job well done under challenging circumstances.

Once the patients were in the care of the highly trained Hospital Staff, the Pilots and Crews from all three Rescue Helicopters gathered to debrief and discuss the job before returning to their bases to await their next rescue mission.

Renata Apatu was widely known in the rural community. He was a leader in the wool industry and helped to run a very successful family owned beef and lamb operation with his siblings.

He was known to be a kind, generous and caring gentleman who was loved by many. Most importantly though, he was a husband and a father. His loss will leave a huge hole in the lives of his wife Sally and three children, Angus, Olivia and Greta. We send our very deepest condolences to them all at this very difficult time.

Ren and Ngamatea Station have been incredible supporters of our Rescue Helicopter Service. They knew the vital importance of keeping us flying because you never know when you, a friend, or loved one will need our help.

We are so incredibly grateful to the people who continue to financially support our service so we are there when we are needed - as we were on that day. 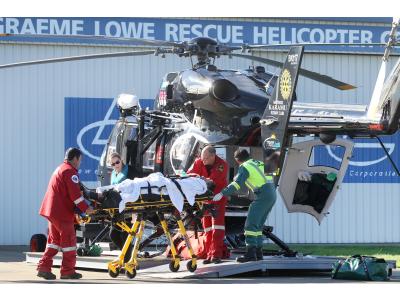